Today I would like to introduce you to a French illustrator who is probably still known to many in France, but whose work is probably no longer seen in Germany.

It is about Madeleine-Amélie Franc-Nohain, also Marie-Madeleine Franc-Nohain or Madeleine-Amélie Dauphin. She was a French illustrator who worked on many well-known children's books and published books under her own name. She was also involved as an artist and illustrator in a book that the Twitter account @GallicaBnF featured in a little guessing game on 09 February 2022. @GallicaBnF is the account of the digital library of the French National Library @laBnFor Bibliothèque nationale de France.

To do this, first take a small step to the side.

The quiz was about the book Les Malheurs de Sophie, which can best be translated as Sophie's Misadventures or The Bad Luck Sophie. The question was who wrote it. Unfortunately, I didn't even know it. Although the stories about little Sophie are probably most similar in meaning to the stories about the German Struwwelpeter by Heinrich Hoffmann. The French children's book was written by one of the most famous and important children's authors of the 19th century.

It was written by the Comtesse Sophie de Ségur, who was born in St. Petersburg on 1 August 1799 and died in Paris on 9 February 1874. The anniversary of the author's death was the reason for the guessing game. The Countess was Russian by birth, with a family tree stretching back to the Mongol Khans of the Golden Horde and the family of Genghis Khan. Born Sofia Fyodorovna Rostoptchina, she was the third child of Countess Catherine Protassova, a former bridesmaid of Catherine II and the Russian general and minister Fyodor Vasilyevich Rostoptchin.

How did the Comtesse come to France?

Not only was it common in the 19th century for the children of the Russian aristocracy to be educated by foreign teachers. They even sometimes learned French or German before Russian; were sent to live with relatives in the European aristocracy. French was a popular language at the Russian court; it was a way to stand out from the ordinary people. As a result of the events surrounding the invasion of Russia by Napoleon's Grande Armée, Fyodor Rostopchin was forced to flee and finally arrived in France with his family via Poland and Germany. He left behind an estate with over 4000 employees.

In France, Sophie unhappily married Eugène de Ségur, who later became president of the Eastern Railway Company. In return, her father gave her a country estate in Normandy as a consolation, she had eight children and after the birth of the last child she was bedridden for 13 long years.

When she is better again, the children are out of the house. She ends up writing many letters to them, then she writes novels, these are published by Bibliothèque des Chemins de Fer, a series that the publisher Hachette sold as travel reading at railway stations. She became a sought-after author, but could hardly satisfy the publisher's demand. Luise F. Putsch writes about her style on Fembio.org:

Possibly in her book Les Malheurs de Sophie, she elaborates on her childhood on her father's huge Voronovo estate in Russia. It is said about her childhood that she was a restless little girl, punishments were the order of the day.

What is the book about?

The story is about a naughty little girl, Sophie, who grows up in a castle in the countryside of France during the Second French Empire. An adventurous girl, she is curious, but many mishaps happen to her. Her cousin Paul is the figure who is always there to set her on the right path, the well-behaved path. Sophie has two friends: Camille and Madeleine de Fleurville. Both provide further role models for Sophie, as they are well-mannered, educated "really good" little girls that Sophie is supposed to emulate.

The book is still popular and successful today. It has been made into a film three times, most recently in 2016 under the title Les Malheurs de Sophie by Christophe Honoré.

In 1933, the publishing house Tours Maison Alfred Mame et Fils reissued the stories about the unlucky Sophie. The 55-year-old French illustrator and artist Madeleine-Amélie Franc-Nohain was hired as illustrator.

Madeleine-Amélie Franc-Nohain was born on 6 June 1878 in Valmondois as one of two daughters from the marriage of Marguerite Pigot (1852-1917) to the musician and poet Léopold Dauphin (1847-1925) from the Languedoc. On 3 March 1899, at the age of 21, she married the writer Maurice Étienne Legrand, called Franc-Nohain, whose pen name she adopted to sign her works. Her husband, known by the pen name Franc-Nohain, wrote, among other things, the libretto of the opera The Spanish Hour by Maurice Ravel, which premiered in 1912.

It was probably her father who placed her with the magazine L'Aube méridionale, for which she produced some drawings.

Madeleine-Amélie Franc-Nohain worked very actively as an illustrator, including for the magazine L'Aube méridionale, on which her father, the Languedoc musician and poet Léopold Dauphin, collaborated; she worked for Gustave Goetschy's magazine Paris-Noël; finally, from 1902, she created illustrations for Le Rire under the signatures "mf-n" or "Maud Franc-Nohain" and from 1912 to 1914 for the Journal des dames et des modes under the monogram "mfn". This was to remain your signature.

The above work beautifully shows the typical style of the of many modern fashion drawings of the period, elegant, slender, aspiring and light. Doves and perhaps olive branches as a sign of peace.

She published her first own book in 1914 in Éditions Grasset, it was called Le Journal de bébé, and appears in two versions: blue for boys and pink for girls. It is reprinted several times, in 1927, in 1980 by Nestlé and in 1987 by the Metropolitan Museum of Art.

In the period between the two world wars, she illustrated numerous children's books for Plon, Flammarion, Larousse, Desclée de Brouwer and especially Mame. Marie-Madeleine regularly contributed in the Benjamines section to the newspaper Benjamin, founded by her son Jean.

from which the above illustration is taken. The bookcontains 30 illustrations, many of them in colour.

The intro says: "The children often have pretty ideas in their dialogues and games. This adds to the charm of the albums in which they play the leading role. What makes these so wittily drawn "Parisian stories" even more attractive is the fact that they are set in the most delicious of settings: Paris. We go from the Champs-Élysées to the Bassin des Tuileries, under the Eiffel Tower and into the great department stores."

The picture above actually makes me think of Schuh Voss in Wuppertal-Elberfeld, who also had a slide in their shoe shop. In my memory it should probably be bigger than it was, but this was the shop I enjoyed going to with my parents as a child.

Games, 1933
A book about children's games, such as hide and seek etc. - Beautifully light and delicate illustrations, generous use of white space, gracefully drawn movements.
Book on Gallica: Jeux

Wild animals, 1933
30 illustrations, 15 of them in colour. The many colour plates and the accompanying texts invite the reader to tell, read aloud and spin stories.
Book on Gallica: Les Animaux Sauvages

Alphabet in pictures
31 colour illustrations of the alphabet with accompanying texts. For the letter C (which I did not choose at random, of course) it says: „Colette dans sa cabane donne de coquelicots a son cabri“. In English: „Colette in her hut gives poppies to her kid.“
Book on Gallica:  Alphabet en images

Domestic and pet animals
30 illustrations, 8 of them in colour - drawings that invite you to colour them in.
Book on Gallica: Animaux domestiques et familiers

Many books are labelled " Cet album peut être colorié ", which means: "This album can be coloured". Even if it makes life difficult for collectors today, I am happy about it and many children must have loved it.

At the rate of months

Madeleine-Amélie Franc-Nohain raised three children during her lifetime. It is said that it took her about three months to illustrate a book. In addition to works with only her name on them, she illustrated a whole series of other works besides the well-known book Les Malheurs de Sophie, including a book by her son Jean Nohain (1900 - 1981).

Great Men When They Were Little from 1931
by Jaboune bürgerlich Jean Nohain (1900 - 1981), her son
The book on Gallica: Les grands hommes quand ils étaient petits

Another book was illustrated for the Comtesse de Ségur:

In 1938, she illustrated the book Chanton Noël - Christmas Songs for the pedagogue, composer and orchestra director Ernest van der Velde, the inventor of the Méthode Rose for the piano. The songs in the book are backed with colour illustrations.
Unfortunately I did not find it on Gallica. As a search tip: I found an auction on eBay where a few glimpses into the book were possible.

The book breathes the charm of thirties fashion, the illustrations accompanying the text are juxtaposed with the text in an interesting and different way. In the illustrated scenes, Madeleine-Amélie Franc-Nohain manages to depict everyday situations and characters with simple strokes. The compositions are balanced and break the rigid frame of a rectangular drawing surface in many places. I particularly like the works for this book.
The book on Gallica: Rémi en vacances

Children, playing children, experiencing children - they carry the illustrations and dominate them. In the faces of the children, in the drawn joy, one sees the love of their creator.

She depicts childhood with sometimes naïve-looking strokes, but her view as a mother of three children on their lives remains free of mawkishness, it is neutral and observant, yet very detailed.

Her illustrations seem light and airy due to their simple, mostly round shapes, the soft, flat colours, the children sometimes doll-like with angelic faces. Scenes are usually juxtaposed with large empty spaces that give the figures plenty of room for games and activities. Her colours are delicate and clear, pastel and above all mostly cheerfully colourful, never sad or dark. 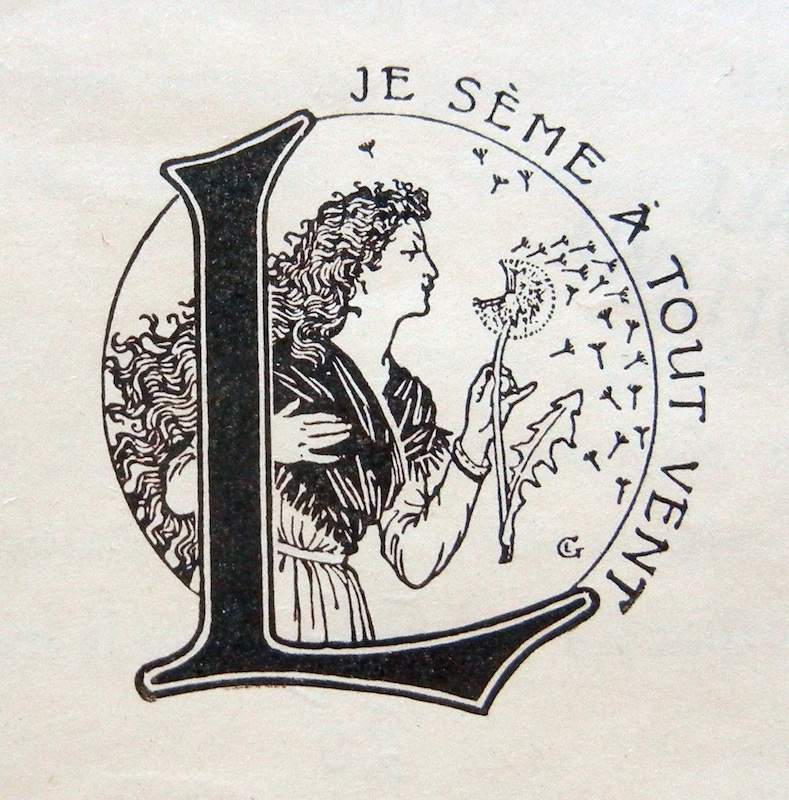 A children's book about the alphabet by Marie-Madeleine Franc-Nohain

In 1925, the new illustrated volume Alphabet en Images by the French illustrator Madeleine-Amélie Franc-Nohain or, as she is called here in the book, Marie-Madeleine Franc-Nohain was published in Paris. I would like to introduce the book to you.

Madeleine-Amélie Franc-Nohain survived her husband by six years. He died on 25 October 1934 in the 7th arrondissement of Paris and was buried in the Père-Lachaise cemetery (section 89).

Not only for the many people in Europe did the Second World War mean a caesura, but for the French illustrator the conquest of France and Paris was also a deep cut.

In 1940, Madeleine-Amélie Franc-Nohain fled with her daughter and daughter-in-law to Genillé near Tours. In 1942 she fell seriously ill, was hospitalised locally and died on 1 September 1942. She was buried in the Père-Lachaise cemetery (89th section), where she rests with her husband and children. After her death, her daughter and son-in-law Claude Legrand travelled to Gibraltar and embarked for England to join the Forces françaises libres.

On her return to France, her daughter Francine resumed her artistic career as an illustrator of children's literature. One of her books is Contes sans fées - Fairy Tales without Fairies, a beautiful title in my opinion. Stylistically, one can clearly see the artistic relationship to her mother in this book.

Her son Jean Nohain, pen name Jaboune, became a well-known playwright, lyricist and screenwriter in France. He may also still be known to many older French people as a radio and television producer and presenter. He died in 1981.

His brother Claude Dauphin is a well-known French actor who appeared in more than 120 films since 1930. He died in 1978.

10.02.2022: Information on works reformatted in the text, all works by Madeleine-Amélie Franc-Nohain included and structured in the sources as far as possible.

16.02.2022: Added further spellings of her name in the intro, some of which are also used by publishers: Marie-Madeleine Franc-Nohain or Madeleine-Amélie Dauphin.

In my new essay, I introduce the French illustrator Madeleine-Amélie Franc-Nohain. She became known for her illustrations of numerous children's books.